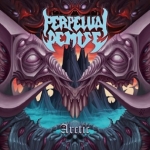 Back in the early nineties, the Dutch scene had a proclivity for Death Doom Metal, and this is exactly what this re-release is about, adding the melodic touches. It is a new edition of the only full-length album and final release or PERPETUAL DEMISE, the 1996 “Arctic” album, re-mastered and with new cover artwork and bonus material. And a valid effort it is. The production is crystal clear but still very heavy, and you can plainly appreciate every instrument, which is welcome because they are well handled. The drummer, mainly, is usually quite busy and delivers an impressive performance. By 1996 Metal was living the aftermath of the release of very influential albums by bands like TIAMAT, AMORPHIS, CREMATORY and quite a few others of their ilk, and PERPETUAL DEMISE clearly drew from this pool. Occasional typical touches of the time, like clean vocals, acoustic guitars, whisperings, are actually used rather sparsely, and the songs rely primarily on the strength of its more straightforward Death / Doom moments (often speeding up into a higher gear) and the competent compositions. In truth, those episodic clean vocals don’t really work all that well here, which I don’t actually dislike because we are remembered of the real underground times, when often great demos would have these minor flaws that added to their personality. Speaking of which, at the end we have the full “When Fear Becomes…” 1993 demo (a far deathier release that reveals their later evolution). A strong CD, a good trip down memory lane, and more than just that. Old school Death / Doomsters are bound to enjoy this a lot. Look for more info at the site of this praiseworthy label that has been resurrecting many gems of an underground past: www.vicrecords.com