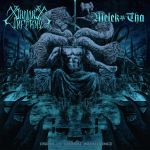 Sometimes it can be pretty fascinating if two bands with a different musical background team up for a joint effort like a split release. But sometimes it is not. The latter goes for this split release from the Texan Death Metal act PHALANX INFERNO and the French Dark Ambient project MELEK-THA. The explanation for this is rather simple. PHALANX INFERNO are, in my humble opinion, a rather mediocre band of the genre, which sounds to me like all this was heard before and will be heard again from other bands. Rather exchangeable riffs meet typical vocals. Yet the sound of the four songs from PHALANX INFERNO is pretty fine and unpolished, which does the music a great favour. And to be fair: The first song ‘Diminished Dominant’ is really a good one, as it is mainly in a dense mid tempo beat and thus somehow reminds me of DRAWN AND QUARTERED. Some more of this might have helped PHALANX INFERNO quite a lot. But maybe we can take this as a promise for future releases of the band. So PHALANX INFERNO is not the greatest reason why I most likely won’t listen to “Order Of Eternal Indifference” again, especially not in its entirety. The major part of the running time is taken by MELEK-THA. The first two of their offers serve as intro and outro to the songs of PHALANX INFERNO, rather short pieces of ambient music that frame the songs of the band. But as soon as MELEK-THA take the lead and present their own music, I’m out. It’s not that their music is bad, as I can’t and don’t dare to judge Ambient music. Guess MELEK-THA can’t be that bad, as they have about 70 (!) releases out in 25 years. The real problem is that the musical genre Ambient really bores me to death, that’s why I had a hard time listening completely to the four MELEK-THA songs. Overall, it was a real hardship for me to listen to all of “Order Of Eternal Indifference”. The songs of PHALANX INFERNO might be worth the hardship for some readers of the pages. Find out more at www.facebook.com/phalanxinferno, melektha.free.fr or www.facebook.com/godzovwar