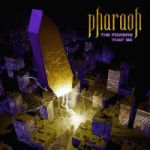 PHARAOH
The Powers That Be
(Cruz Del Sur Music)
44:32min

US Metal is a genre with lots of sub-genres and if anyone wants to get a general view, this album is the right place for you. “The Powers That Be” is already album number five by PHARAOH, a band which was founded back in 1997 and completely flew below the radar, at least here in Europe. The last album “Bury The Light” is nine years old, so exactly during the last years when classic Heavy Metal became more and more famous the band was absent. The band, but not the drummer Chris Black, who earned quite a reputation with his other bands HIGH SPIRITS and DAWNBRINGER. But back to PHARAO and there are several aspects I like about the nine track. The vocals are expressive and clean, but a bit raspy and therefore avoiding the trap high-pitched singing, which very often just ends up in shrill wobbling. Furthermore the songwriting is dynamic and technical but never just for its own sake. Instead the focus is on writing Heavy Metal songs with a high recognition value. And if the skills of the involved musicians and the sound is on an high level like in this case, it is nothing but pure joy for the aficionado of electrically amplified music. Even if you are devoted to more extreme genres like Death and Black Metal, everyone should do themselves a favor and visit www.facebook.com/pharaohofficial or www.facebook.com/cruzdelsurmusic