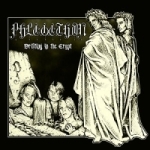 WOW, what a mammoth release this one! Spanish Xtreem Music slapped all demos / EPs / promos by now defunct (?) Finnish band PHLEGETHON on a double CD, so rejoice if you’ve worn out their tapes and been dying from nostalgia. First thing that strikes me listening to this material is that PHLEGETHON weren’t really sure what the hell they wanted to play, so each release sounds as if recorded by different bands which in this case gives a very disjointed picture. So here we go… Disc 1 starts with the “Neutral Forest” demo ’90, offering fast paced Death / Thrash with some weird slow passages. It’s not bad, a rough sounding bunch of tracks, but they’re too drawn out and in the end I’m bored. Hell, this was only the beginning though… Next 6 tracks are from the “Visio Dei Beatifica” demo ’89. This shit is much better, altough it sounds very lo-fi. It’s fast, blackened Punk / Thrash which I appreciate, but once again… Punk / Thrash songs going for 6 or 9 minutes are waayyy too long. They usually slow down in the middle, but the arrangements are too simple to hold the attention. Disc 1 is rounded by 3 tracks from promo’95 and by that time PHLEGETHON apparently got into SENTENCED, GOREFEST, CARCASS and the whole melodic / groovy thing that’s been going on in mid 90s. The songs sound much cleaner by now, raspy vocals and groove just oozes from it, but it’s a far cry from the bands they were trying to emulate. On to Disc 2… 4 tracks from the “Fresco Lungs” EP’ 91 plus 2 bonus ditties from the CD version of the same release and I have to control myself hard not to rip this to pieces. Once again the tracks are way too long, you can hear bits from old AMORPHIS, MY DYING BRIDE and MONUMENTUM, especially how the keyboards are incorporated into the songs, simplistic arrangements put me to sleep though, so you probably guessed by now that I’m not too fond of this. The last track ‘Without Tea Waters’, a bonus track from the “Fresco Lungs” CD, is heavily Industrial inspired rubbish. Mind you, I love good Industrial Metal, but this is just crap. Fast forward 14 years to 4 tracks from the “Totems Within” demo 2006 and revamped PHLEGETHON changes its style to energetic Death / Thrash, not unlike DEMOLITION HAMMER or even EXHORDER, both great bands, so I like this much better, the sound is beefed up and modern… you still with me?? The screamish vocal delivery sucks, though. Another couple tracks come from the “Lava Poetry” demo 2007 are much in the same vein as “Totems Within”, but more varied and developed, so at this point it starts to nibble at my scepticism. And finally we have the freshest PHLEGETHON offering, “Circle Of The Hybrid Statues”. This is rough sounding Death Metal, old school Swedish style reigning supreme here! Fuck, this last track is really catchy and cool, the only worthy of praise song on the whole double album, but it also says a lot about the band’s integrity which is non-existent. So here you have it. To put it shortly, this release may appeal for nostalgia freaks and collectors of long forgotten underground bands, but I just woke up from boredom induced coma, thanks to the last 3 tracks on the whole package. What will be the next underground fad PHLEGETHON will try to explore? Just wait and see. www.myspace.com/phlegethonfin, www.xtreemmusic.com