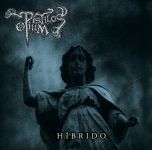 In Spanish ‘pistilo’ means instrument used with a mortar to grind things, also a discrete unit in the center of a flower which receives the pollen and produces a fruit. Now, adding that with ‘opium’, many abstract visons popped up while thinking about the origin of this Chilean Death Metal act. PISTILOS OPIUM spawned very recently from the ashes of IGNOMINIA (previously known as HAUNTED CHRISTIANS), which were born in 2003, and played Death Metal with lots of influences from the late 80s / early 90s Tampa Florida Death scene plus all the South American onslaught from the 80s as well. Although in papers PISTILOS OPIUM is another band of IGNOMINIA members, but in this “Híbrido” EP these Chilean warriors encapsulated something that can easily set them apart. A Death Metal band with a solid old school style, combined with gloomy parts, which may not be revolutionary, nor unique but totally engrossing, like all classic works sound. All these four tracks have an obscure feel, which sounds not only menacing but also fierce and malicious. The production, as it should be coming from a South American band, is organic, yet reeks of insanity and wickedness. Such is the strong tradition and characteristics of this sound, anyone without any idea about PISTILOS OPIUM, can sense its origin. The distinctive accent of the vocalist with Spanish lyrics will also leave no doubts. The whole EP is 18:44 minutes long and the tracks ‘Distancia’, ‘Híbrido’, ‘Pernicioso’ and ‘Destrucción De Fe’ fantastically reflects the essence of Chile, Brazil and the South American Death Metal sound in general and the title “Híbrido” (meaning Hybrid), fittingly chosen here, as this EP surely resulted from mutation of sounds originated in greater past. Recorded and mastered at DM6 Studio in February 2019; initially Thanatology Productions from China released this EP in 2019 (cassette and digital) format, later PISTILOS OPIUM also associated with Fallen Temple Records (CD and digital format), which shall reach all the fascinated followers of this continent’s legacy. Explore more about the band at www.facebook.com/pistilosopium and visit their label page at www.fallentemple.pl.