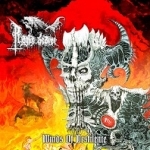 PLAGUE BEARER from the US were totally unknown to me so far, even though they started being active back in 1992. Checking them more detailed made clear that this was a project which later lead into the better known DRAWN AND QUARTERED who just released their fantastic album "The One Who Lurks". So checking their roots could be an interesting journey. "Winds Of Pestilence“ is a compilation of two demos and starts with the "Winds Of Pestilence“ demo. ‘In Satan’s Name‘ starts pretty grim and offers freezing 90s Black Metal in the vein of the old Norwegian school. The blistering guitars get paired with some really grim caws and very solid but fast drumming. The memorable lead melody fits very well into the whole picture and the gets rounded off by a raw but well-fitting production. ‘Christbane‘ starts with some Rock’n’Roll tunes and is a Black Metal hommage to MOTÖRHEAD before ‘Northwest Hordes‘ return to the Black Metal path. This is another grim and raw Black Metal track but less melodic than the opener. ‘Legions Of Corruption And Sodomy‘ follows the same way and is getting even more rough and evil before ‘Wolfthrone‘ closes this rough Black Metal trip back into the early 90s when a bunch of kids in Norway brought their evil attitude on a totally new level. A nice track with a really cool Heavy Metal interlude. The "Defiled By Sodomy" demo was released back in 2001 and is different to the other demo as the same titled opener clearly shows a movement into Death Metal and sounds like an old rehearsal track from DEICIDE with some solid Death Metal tunes and Benton styled vocals. ‘Decapitated Angels‘ goes back into the Black Metal direction while the vocals are somewhere in the middle but guitars and drumming are more Black Metal orientated and pretty cold and grim again while ‘Under One Sign‘ continues this way but offers a more melodic approach. ‘Churches Are In Flames‘ is their most melodic song so far and could also have fitted on a 90s melodic Black Metal album from Sweden of the No Fashion era. ‘Incinerate The Flesh Of Christ‘ returns again into the Death Metal direction with some Black Metal tunes incorporated before last track ‘Desecrate The Incarnation‘ closes this trip back into the past with another Death Metal influenced bastard. Surely, this output is only for die hard fans of DRAWN AND QUARTERED, but it shows that the guys should have continued to develop their Black Metal ideas in this project but also should have separated the Death Metal ideas from PLAGUE BEARER. Pure underground but good material anyway. For more info, please check www.krucyatorproductions.com