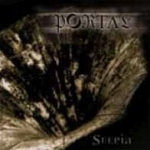 I actually listened to the first album of this Aussie monster after their split and the second album, “Outré”, as these two pieces of apocalypse totally blew me away. “Seepia” was released in 2003 by Black Talon Media, and then re-released in 2008 by Profound Lore, but Osmose Productions is now unleashing it for Europe just as their last effort. If you already read the “Outré” review, you know what you can find here. The most obscure mix of extreme Metal and noisiest sounds. But there’s a little difference between this recording and their new album, which is a less controlled chaos, a more primal fury. Traces of Death and Black Metal are much more present here, creating a tornado of brutality which already showed those ritualistic details, especially on the vocals, but closer to a hybrid between the sounds of BLASPHEMY and BEHERIT with the brutal and technical chaos of the last GORGUTS albums. You’ve got the technique, pretty astonishing, with loads of breaks, tempo changes and incredibly weird melodies, but buried in such a furious chaos that you don’t have the impression of listening to some kind of “technical brutal Death” band. It’s really close to the idea of MORBID ANGEL in the “Covenant” era, dark, brutal and full of magic, but processed through a particle accelerator, and with the suffocating ambience which only PORTAL know how to build. Essential if you liked “Outré”. In case you never listened to them, get drowned by chaos, you’ll never forget it. www.osmoseproductions.com