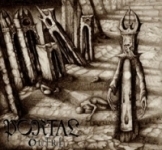 Worshippers of the most deep obscurity and other creatures, here you have the album you’ve been waiting for. Portal is an extremely strange Aussie trio obssessed with the vintage mythos of our past century, as you can see on their artwork, which already released a split album with the also highly interesting Rites Of The Degringolade, as well as a first album, "Seepia". This second album was originally released by Profound Lore, but now French label Osmose Productions is re-releasing it for Europe. It’s enough to see the pictures of the band to notice that they like ocultism and other bizarre subjects. In fact it’s not so easy to describe their sound. There’s only one word that comes to my mind, and this is darkness, as only a few albums see the light with such dense atmospheres, be it Black, Death or Doom Metal. And it’s not so easy to place PORTAL, as they take a bit of everyone of those styles and mix it on their own sound, which, if they didn’t use the typical instruments and rythms of Metal, would be closer to some kind of Dark Ambient band. Slow and heavy atmospheres, noisy and unhinging guitars similar to the craziest ones of MORBID ANGEL, fast drums when they need them, a feeling usual in the most raw Black Metal bands and a vocal section which is fucking hypnotic, low and phantasmagoric, a slow recitation which not always follows the tempo of the music. All of this without forgiving different noises which come and go from time to time. I can’t deny that they remind me a bit (more for the ambience than for the music directly) of the most ethereal moments of the first AKERCOCKE album. So you have a small idea of the kind of ambiences you can find here, and which can become even more hypnotic, and with less Death Metal in them. Maybe the production is what doesn’t stand out on this album. It is certainly raw and sick (even if it doesn’t sound bad), but I’m not sure that this would have the same charm and chaotic touch with a cleaner one. Maybe it could have some more clarity and precision on the drums and guitars. Totally recommended for the ones who follow the noisiest and darkest tendencies. www.osmoseproductions.com