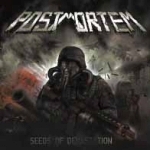 If we compare the current German Death Metal scene with the old gods of the Greek, the lunatics from POSTMORTEM definitely deserve one of the twelve thrones on Mount Olympus. After nearly 25 years of constant hate and as one of the few survivors of the German age of mass-murder the band from Berlin has finally arrived at the peak of their long time career. With their fifth album they are easily in the position to combine their forces and experience and record an album which will impress the surrounding press and again increase their hordes of supporters. The extreme variety within the presented 11 tracks of “Seeds Of Devastation” is making the difference. To avoid a wrong impression and to make all hardliners more than happy is this output in the end still a typical Death / Thrash Metal release but POSTMORTEM are in the position to alter the focus from time to time by changing the given priorities. The album starts with ‘Deliverance’, a very Death Metal focused song with a lot of groove and BOLT THROWER attitude but the follow up track ‘Give Us Hate’ is in contrary a typical Thrash Metal bullet with far more parallels to the old Bay Area scene. The superb songwriting is supported by a transparent and extreme powerful sound and I know that this release will get the deserved attention. So let’s pick up your spear and hail them, hail them without end! For further info check out www.war-anthem.de, www.myspace.com/postmortem1