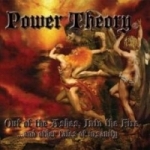 POWER THEORY
Out Of The Ashes, Into The Fire
(Pure Steel Records)
45:44min

US True/Heavy Metal band Power Theory was formed in 2007 by Bob ‘BB’ Ballinger, and his primary idea was to blend quite a few different Metal styles together in order to make POWER THEORY to sound the kind of band that would pretty much get that ‘classic Heavy Metal’ label tagged all over it. With the help of his other band mates that also had some experiences in some other bands already (EVIL JESTER, AGGRESSIVE DISORDER, AFTER GLOW – just to name only a few), it can be said that’s exactly what POWER THEORY represents musically: Classic, crunchy, riff-based and strongly NWOBHM-flavored Heavy Metal that takes no prisoners, but rolls over its listeners beautifully yet so mercilessly like tomorrow would never come. Seriously, listening to POWER THEORY, it comes pretty unavoidable to start a criminal band name picking. Depending on each song on "Out Of The Ashes…", one is able to say this or that song has a familiar SAXON – or ACCEPT – or PRIEST – or MAIDEN vibe to it. Yes, that’s true – and there’s no way you could possibly avoid comparing POWER THEORY to some of those aforementioned classic Metal acts completely when some of you were once introduced to the Heavy Metal genre for the first time – just no matter how hard you tried. The influences are certainly there, but then again, it’s no ultimate sin to re-use an old formula of music that already has it all to make listeners pleased and happy, right? The band has recorded a very solid Metal album that does not pale terribly much in comparison to some other so-called ‘classic Heavy Metal’ sounding albums in terms of delivering its goods the best possible way it can. The quality voice of Dave Santini also adds nicely sort of ‘feeling home’ vibe to the record, reminding me vocally of a cross between Udo Dirkschneider, Biff Byford and even Sy Keeler occasionally here and there, whilst instrumental-wise the other musicians in the band seem to be well aware of their roles to support Bob’s original vision about POWER THEORY. "Out Of The Ashes, Into The Fire" earns a fair amount of ‘ thumbs up’ for being a good Metal record, but not outstanding. www.myspace.com/powertheorytheband or www.puresteel-records.com