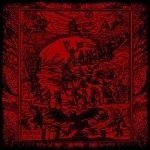 A new infernal storm is rising from the South. I don’t know if I will ever solve the enigma why there are so many high quality acts coming from Chile. PRAISE THE FLAME is another example how great the scene in this country is. If you are into violent, uncompromising and obscure old school Death Metal than this unholy three piece should be immediately added to your shopping list. Right after the last tones of the obligatory intro fell silent the band unleashes its lethal storm of utter darkness. ‘Mayhemic Wrath Of Glorior’ sets the bar quite high, rages with fury and absolutely takes no prisoners. Killer riffs and bursting speed will let you beg for mercy. If you thought this opener can’t be topped then their second effort ‘Endless Scourge’ will prove you wrong. A total devastating track delivering the best Metal of Death done the ancient way you can get. These Southamerican lads really know how to create inspiring music played with total passion and devotion. The skills of this trio are top notch using their excellent playing abilities to come up with the right vibe and dark atmosphere. The variation of the pace and the great breaks make this stuff so intense… and the superb leads and killer growls are just the icing on the cake. Some similiar bands with stylistic parallels which are flashing into my mind are SADISTIC INTENT, HEADHUNTER DC and alikes. So you have at least a hint what to expect from this supreme act. And if you weren’t pulverized by the first two songs then the last two one’s will give you the rest. The only thing I can recommend to all deathbangers out there is to immediately purchase one piece of this killer MCD. Fall to your knees and PRAISE THE FLAME. Hope there will be a full length album soon. Check out the label’s website for ordering details and more information: www.soundcloud.com/apocalypticprods.

Well, this is the third review of this release, which is truly becoming a cult one. Three different versions definitely deserve to be mentioned separately. And it seems that Portugal’s Caverna Abismal Records gave it the ultimate cult meaning in the true sense of this word. The "Profane Cult" tape contains 3 bonus tracks and that’s almost 15 minutes of new music in addition to the 4 tracks already known from earlier versions. Since those have been reviewed already, let’s concentrate on the new additions. First is ‘Rise The Witchpower’ clocking at 5:40 minutes – slow, choking riff in dragging tempo soon breaks away into an annihilating Death Metal attack and the speed just increases towards the superblasting VADER influenced part. The composition then develops into a slithering hellish onslaught South American style – controlled madness takes over. Over the course of it you are dragged into the raging flames and can’t fuckin’ stop headbanging – this is infectious as the strongest fuckin’ virus. Next bonus track is ‘Fire Forces Of Hate’ – a blasting attack from the very beginning which gets even faster as you’re now start smashing the walls if listening to this at home – the intensity of the drumming and melting riffs with dark, sadistic vocals just nails the final point down – PRAISE THE FLAME absolutely rages and shows how old school Death Metal has to be played and delivered. The SEPULTURA cover ‘Show Me The Wrath’ finishes this tape on the highest level, I would even say that it blows the original version to pieces, they really breathed their flame into it. So what the fuck are you gonna do? Point your browsers to the Caverna Abismal site https://cavernaabismal.bandcamp.com and order this tape immediately, only 200 hundred have been made and I’m sure they’ll be gone soon! Releases like these help to conjure the feeling of old times and paradoxically it is like a fresh air amongst countless generic shit releases which are being pumped out every day. Get it right now!! More about PRAISE THE FLAME at www.facebook.com/praisetheflame 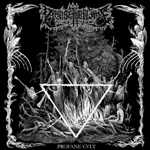 Hell yeah… I always said that the underground scene in Chile is fucking brilliant and that the emission of outstanding bands from that South American country is just unbelievable. Here we have another proof for my thesis and the next gem from there: PRAISE THE FLAME. With "Profane Cult" those demons deliver a overwhelming piece of obscure and annihilating old school Death Metal. This EP, that originally was released through Chile’s Apocalyptic Productions, contains four sinister and absolutely furious hymns of darkened Death Metal (plus intro / outro + UNLEASHED cover exclusively on this re-release). Don’t expect anything new, anything to re-invent the genre or anything extraordinaire but crushing and unrelenting in your face Death Metal. Those Chilean Death mongers created superb songs, full of neck-breacking riffs, thundering drums, tempo variations and demonic vocals from the deepest pits of hell. One devastating track follows the other so I can’t say which one is the best. But I have to say, that the band’s own compositions are even stronger than that UNLEASHED classic. I’m not kidding, the skill of the musicians and their songwriting abilities are over the top and this is definitely a must have release. I really can’t wait to get my fingers on their debut full-length. So stop reading now, buy this brilliant piece of Death Metal and PRAISE THE FLAME!!! (the vinyl version of this re-release is out on Blood Harvest Records, while a limited edition CD of 500 copies is available through Metal Inquisition Records – Frank). More info at: www.praisetheflame.bandcamp.com, www.bloodharvest.se, www.metal-inquisition.de