I guess I don’t tell you a big secret that the extreme underground Metal scene in Chile has a very good reputation amongst the headbangers worldwide. The metallic hordes of that country from the Southern hemisphere delivered absolute fantastic Metal over the last few decades. Within the past few years Chile became my favourite location and first choice when it comes to Death / Thrash Metal from South America. The quality of so passionate outfits (dedicated more than 100% to what they are doing) spoke and speaks for itself. PRAISE THE FLAME is one of those new fascinating squads which took me by storm after the first listening to their total killer EP entitled "Profane Cult". As these lads from Santiago might be still a little bit unknown to some of you out there, albeit all members are no newcomers at all and were active in other bands for ages, I got in touch with this bestial horde. So join us and revel in utter darkness… 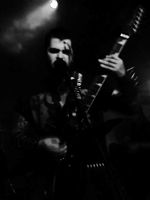 Infernal Greetings. How are things going right now in the darkest abyss of the Chilean underground?
"As the hell itself!!! Hundreds of malignant hordes are ready to destroy everything!! Chile is aflame! HAIL CHAOS -l- -l- -l-"

I guess just pure die hard Death Metal lunatics are aware of your devastating outfit. So just provide us some basic infos how the entity of PRAISE THE FLAME was created and if you have been active in other hordes before.
"PRAISE THE FLAME was furiously born in the middle of 2012 in Santiago, Chile when JJ and Druaghonic left the band INSORCIST. Then, at the end of August of the same year, JJ (at that time with no band) told me about his desire to form a band with no other purpose than making merciless and obscure Death Metal so, of course, I joined the band immediately. Right after that the demon Druaghonic, who also plays in the old cult band DEATH YELL, joined. Our first rehearsal was in September and that’s how PRAISE THE FLAME was born. I played lead guitar approximately 3 years in NIGROMANCIA, an underground Death Metal Band located in Peñaflor, this band died more than 13 years ago!"

Your "Profane Cult" MCD is an absolute killer, having just the best ingredients you can imagine. A lethal storm of utter darkness like I used to describe your music. How do you come up with the music and what influences you for the songwriting process? Who is involved in that process as well?

"We play obscure and killer Death Metal, the strongest and destructive genre that exists! That was our intention from the beginning, channel our inner fire with fury through our music. The lyrics are written by JJ, with topics as satanism, destruction, death, darkness, pure blasphemy and occultism. As for the music the three of us take death’s weapon in the matter of composing. Our music is destined to the obscure souls of the strong ones!"

I always say that you can hear just from the first notes if a band has the right attitude and vibe for the music (like your horde). Do you agree?
"Yes I agree with it. Anyway exceptions exist since there are very complex bands that are difficult to digest and one is stopped to listen, somehow to try to understand the structures and complexion. But definitively the "shit" bands and without attitude are identified immediately!"

Even your brand of Death Metal is uncompromising you try to vary it with tempo changes, killer breaks or furious leads. How important is this for you and the tracks you compose? You also have a strong Thrash Metal approach in your riffing. Agree? Which bands have an big impact on your outfit? 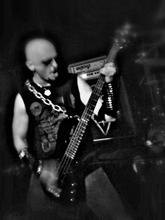 "The Death Metal that we execute is violent, dark and direct. In few occasions we like to mix raw and killer riffs with certain games of compases and violent changes, but without managing to be technical. We are not interested to demonstrate any type of skills how to execute our instruments, but certainly there are moments in which passages can be perceived with major complexity in the execution. Our principal musical influences come from works such as "Seven Churches", "Pleasure To Kill", "In The Sign Of Evil", "Scream Bloody Gore", "Impending Doom", "Show No Mercy", "Altars Of Madness" etc; to name only some… in all these works there is enough Thrash. That is the reason as you can imagine that those type of riffs flow naturally in our veins and it is complemented itself mostly with obscure and suffocating riffs."

How was the response on this five tracker so far?
"We’re doing pretty well with "Profane Cvlt". We’ve received excellent comments from different sources. It’s going to be released in Europe by Metal Inquisition on digi CD and also on 12” LP by Blood Harvest. Both versions will contain bonus tracks and new cover art by Juanjo Catellano."

Your MCD was released by Marco of Apocalyptic Zine. How was it to work with him and has the collaboration met your expectations? 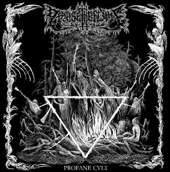 "Marco is our friend, he does a great job to release bands as us. He also has excellent contacts and distribution. The only point against him is that he vomited only 500 copies of the MCD and the release was sold out abroad quickly in a few months."

Your country Chile has always had (and of course still has) an excellent reputation when it comes to extreme Metal music which makes it my favourite among all other South American countries. What do you think makes bands from your native country so special or what is the reason for that undeniable fact?
"From my point of view, in Chile particularly exists a total and absolute devotion for the Metal (underground), people are dedicated 666%. As a consequence / result our country raises the quantity and quality of bands and this leads that our Metal strikes strongly in the infernal abysses!"

Let us know your views, comments on the following squads…

FORCE OF DARKNESS
"Satan worshipers, one of the best band down here!"

DEATH YELL
"The other band of Druaghonic…(our drummer)." 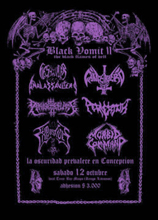 For sure you are a total Metal Maniac. Would you like to share with our readers your 5 all time and 5 current favourite bands and albums?
"Sorry I can not answer this question, I couldn’t make a summary of my favorite music and make a choice in just 5 points, then I’d have nightmares! I can tell you that I listen to classic and current Death Metal plus some Black and Thrash Metal. Mainly hordes of countries such as Australia, Chile, Greece, Brazil, Germany, Peru, Sweden, U.S., Mexico… etc."

What things can we expect from PRAISE THE FLAME in the future? Any new songs written and which label is going to release an upcoming effort from your band?
"We are armed to realize a live recording (rehearsal) in November, this one will go out in tape format and in limited copies. It will be entitled "Rehearsal Cremation". It’s still not clear if we will release it ourselves or through some label. Besides the recording of the rehearsal, we will record a split with ABREKADAVER from Coyhaique on Rawforce, I hope before that finishes this damned year. For 2014 the recording of the LP comes through Memento Mori (Spain) on CD. We hope to havi it out in May."

Thanks for your time to answer the interview. So the last words belong to you. Anything you like to tell all underground warriors out there?
"Michael, thanks for your time and the interest in our band! PRAISE THE SATAN’S FLAME -l- -l- -l- //Necroterror."