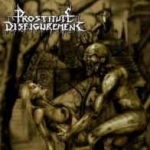 Whew! Frognoize Death Metal from Holland! Again! Isn’t this getting a little too much? Maybe, but not in this case. The first thing that divides PROSTITUTE DISFIGUREMENT from their partners in crime is that their singer sounds considerably deeper than any band from that genre I have listened to, including big acts like DISGORGE or underground bands such as DESPONDENCY. The more notable point is that PROSTITUTE DISFIGUREMENT are quite talented songwriters as they know about the magic of dynamics: after a pretty fast start the band frequently adds groovy parts and melodic old school leads as well as cool old schoolish, rather high vocals. Maybe a good start for people who never heard about frogs singing in Death Metal bands and definitely a relief for people who get bored after listening to this new style after 15 minutes. And of course there is enough stuff for junkies searching for utmost brutality. Recommendable indeed. www.aufderaxe.nl/prostitute