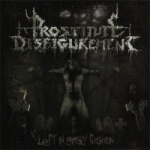 One of the recent up-and-comers of the Dutch brutal Death Metal scene is this quartet of sexual perverts who could gain a good amount of respect from fans and press with their last release “Deeds Of Derangement” and their undeniably present power onstage. Now their third full-length leaves the cavernous insides of a raped and rotten corpse and whoever enjoyed the band’s last onslaught will be highly satisfied by this one as well. Merging violent blasting, catchy breaks with some quite traditional thrashing riffing and ultra-sick vocals sounding like pig at a kosher butchering PROSTITUTE DISFIGUREMENT’s version of brutalizing, grinding Death Metal is musically definitely highly effective and driving. Only the extreme vocals tend to get on my nerves after two songs, but I know from some friends who actually dig this style a lot that it might be a simple case of differing tastes. As a personal note, I was at a disco lately where they played a song off “Left In Grisly Fashion” and instantly joined the people already banging wildly on the dance-floor. Thus, from my own experience PROSTITUTE DISFIGUREMENT definitely have an entertaining, rousing factor and their level of brutality is outstanding. Still, this album isn’t really my cup of tea due to the vocals. Musically it’s not a revolution, but fun to listen to, excellently produced at Studio Excess and a number of cool ideas and real songs instead of over-technical massacres (see e.g. US-DISGORGE) due to the catchier sections keep this predominately high-speed blast inferno interesting and fresh. Links of interest: www.prostitutedisfigurement.com & www.neurotic-records.com