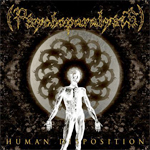 After 3 pretty well received demos, I think the Finnish progressive Death Metallers (PSYCHOPARALYSIS)’s debut full-length studio album was just a matter of time. When no other gets interested in your music, then why one wouldn’t form a label of your own as that’s perhaps the easiest way to get your stuff out, without fearing anything else except the costs and bills when getting everything financed from your own pockets. The DIY method works in most cases, and that’s how I also see it working with (PSYCHOPARALYSIS)’s case. "Human Disposition", the band’s 10-track effort, introduces us to (PSYCHOPARALYSIS)’s, sort of ‘mandatory’ BOLT THROWER – ish and CONVULSE – tinged Death Metal, which indeed is both dynamic and sweetly old school-ish enough – and I have to say that I really like what I am hearing on this disc. Without sacrificing much of anything what they have created on their previous 3 demos, the (PSYCHOPARALYSIS) camp have gone through a transition from a rawer to a bit more refined sound on their latest output, but that’s really all about ‘the news’ when it comes to the change of the band’s musical style (which is about as minimal as possible). In fact, 3 songs are taken from the band’s old demos, and 7 are completely new songs on "Human Disposition". With those nearly minimal ingredients, little miracles can also be done music wise. You necessarily don’t need hundreds of different riffs, solos, tempo or rhythm chances to keep things interesting. It all comes down to find just the correct flow for your stuff, which simply stands out on its own – and that’s where (PSYCHOPARALYSIS) are quite masters at, I think. There’s lotsa good moments on "Human Disposition" one can truly enjoy from. The best thing is absolutely the album’s easily flowing, catchy songs that are spiced carefully yet tastefully with some progressiveness but not too much. Like I said earlier, hence liking the whole album is somewhat easy. Good, surprisingly good stuff altogether here nonetheless. More about the band can be found at www.facebook.com/psychoparalysis, label: www.bwkrecords.com