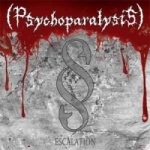 Finland’s progressive Death Metallers (PSYCHOPARALYSIS) have already recorded their 3rd demo ("Escalation") within 2 years – and I have often  seen them compared to bands like DEATH, early AMORPHIS, early SENTENCED and especially BOLT THROWER. Seeing all those band names in comparison to this Finnish quartet, makes you curious about them, right? The "Escalation" demo brings (PSYCHOPARALYSIS) towards more uniqueness and originality – solely judged from a musical perspective, pushing them away from the obvious influences that have been connected to them earlier, which naturally is a good thing. I personally cannot hear any DEATH influence in their sound that much any more, but certainly it’s a band like BOLT THROWER that still haunts pretty strongly behind the (PSYCHOPARALYSIS) troops; the last song ‘Symbol Of Enslavement’ out of the 3 songs on the demo, is pretty much a plain BOLT THROWER worship in its own right but let’s still consider it as a positive thing, too. The opener, ‘The End Results Of Violence’ manages to bite the leg of BOLT THROWER slightly here and there (also reminding me of the Finnish defunct Deathsters CONVULSE’s as well as SENTENCED’s early stuff) but at the same time also introducing the band’s Thrash-gear with a couple of faster and thrashing parts that offer a true refreshment for their sound. Basically the same words could be used for the 2nd track, ‘Beyond Iris’, which includes a couple of more mellow and calmer parts, sort of providing some time for a listener to take a little breath until the band starts firing up with its all 8 cylinders fully open again. What we have here, is a relatively good offering from the (PSYCHOPARALYSIS) camp that surely grab’s many of our attention for what it is: crispy, melodic and old school-ish Death Metal that once set the whole Heavy Metal world on fire. Will (PSYCHOPARALYSIS) be able to do so within some time, too? Let’s hope so at least. www.myspace.com/psychoparalysis