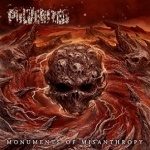 It’s taken eight years since their first demo for Chile’s PULVERIZED to release their first full-length album. Evidently, the years of practice have sharpened this brutal Death Metal band into a force to be reckoned with. "Monuments Of Misanthropy" is just that… a worship of hatred and repulsion. Consisting of Pablo and Andres Valdes (guitars), Claudio Anacona (vocals), Guillermo Fuentes (bass) and Leonardo Taiba (drums), the band pulls no punches as they work their way through almost 38 minutes of unbridled fury. ‘Devocion’ immediately sets the tone for the album with its old school thumping drums, crunching riffs and throaty vocals. PULVERIZED waste no time with silly intros. Claudio growls the song title ‘Consumed By Ignorance’ as if he were announcing it at a live show. Then the galloping guitars kick in to welcome in the track with a filthy presence. This, my friends, is Death Metal. This right here. ‘In The Depths Of Sanity’ somersaults its way forward in an off-kilter array of drumming and fret-filled guitars. The fourth track ‘Cadaveres’ side-steps a little in a mid-paced mastery of sound along with ‘Aniquilacion Genetica’ until the final blistering, stinging, sweltering ‘Profecia-Flagelo-Extincion’ rears its ugly head to consume us all. Six songs is all it takes for PULVERIZED to plant their steel-toed boot firmly in the ground, marking their territory for hopefully years to come. If you want your Death Metal rotten, monstrous and demolishing, give "Monuments Of Misanthropy" a listen. All it’ll take is one to get you hooked. For more information, check out www.facebook.com/pulverizedchile, www.krucyatorproductions.com