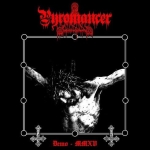 Some things in life were not meant to be understood. Or at least I stopped thinking about them. Why is a demo tape officially re-released? If the band is active for years or decades and has established a solid fan base I totally agree with re-releasing old demos. But PYROMANCER are a new formed band. And what is the purpose of recording a demo tape? To acquire knowledge of writing and recording music and to introduce the band to labels and the scene. Of course nowadays no one owns a cassette deck anymore, but sites like bandcamp or soundcloud have adopted the functions of a demo tape (okay, some people are still listening to tapes, especially in the so-called underground). Up to a certain point I understand bands feeling flattered because a label asks for a official release. But most bands publish demo songs with improved sound, instrumental skills and songwriting on their debut albums. This way is now blocked for PYROMANCER. Well, enough of it. Musically the band from the USA is playing some sort of hyperspeed blasting Black Metal. Wild, barbaric and uncouth, always on the edge of pure chaos, luckily the duo always manages to get around that. Names like BLASPHEMY, BESTIAL WARLUST or SADISTIK EXEKUTION should give you a hint what to expect during the five songs. The only problem, if you regard this as an problem, is the missing recognizability. Each songs is proper played, but after after listening a dozen times I still can not spot a single song. Which does not necessarily is a disadvantage, because I guess War Metal bands never laid much emphasis on recognizability. And furthermore this is, official release back and forth, just a demo, so I do not want to be too rigid. War Metal fans may visit: www.facebook.com/pyromancerblackdeath, www.godzovwar.com