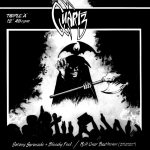 I have to admit that I’m totally addicted to that early British Heavy Metal sound. And so I‘m always very excited that another of those old NWOBHM gems is being re-released. Especially when it comes to one of my favorites from this era: QUARTZ. Their second full-length “Stand Up And Fight” from 1980 is a brilliant masterpiece and definitely one of my all-time favorite classic Metal albums. Every self-respected Metalhead should know that album. QUARTZ was very busy in 1980; the Metal Archives lists eight different releases in 1980. One of those releases is the “Satans Serenade + Bloody Fool / Roll Over Beethoven” EP which originally came out as a 12” vinyl via Reddingtons Rare Records and is now re-released on CD. ‘Roll Over Beethoven’ is a cover of that old Chuck Berry classic. It’s a bonus no more and no less, but the other two songs are awesome hymns of early Heavy Metal, in my humble opinion both songs are NWOBHM classics. Thanks to Skol Records for re-releasing this stuff. Get your copy now. More info at: www.facebook.com/quartzbackintheband, www.skolrecords.com