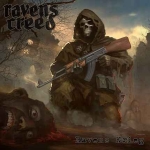 RAVENS CREED is a band I bow down to. Main reason is of cause their poetic lyrical art work. Which is basically unrivalled in its class. How could I ever ignore such highly philosophic effusions as ‘Stand Up And Be Cunted’, ‘Peace Through Superior Firepower’ or ‘Panzer Maniac’. Songs which exist to literally move things. They have always been deeply touching and convincing to me. The fact that they would persuade me again with “Ravens Krieg” was more or less a done deal. I am totally up for receiving the Darwinian ‘Jungle Justice’ or getting buried on the ‘Rock Cemetery’. Bring it on! What is there more to say about a band which is the incarnation of every blunt thought I have throughout the day. RAVENS CREED are not just fixing my conceptions of this world they are also one of the few bands capable of carrying the holy grail of simplest Death Metal. More “Fuck Off!” attitude is nearly impossible in that genre. They have never played any note more then necessary. Never tried to get attention by any kind of special conjuring tricks in sounds or recordings. RAVENS CREED is a band you put in a studio, water their members with booze and press record. Resulting a pure maliciousness which grows like a welwitschia in Lou Chyphier’s own frontyard. Enfolding the beauty of simple hate. “Ravens Krieg” is 40 minuets of uncompromising fast, and catchy Death Metal / ultra violent Punk Rock. Something you need to listen to if you are planning to do something unusual in order to appear on TV news tonight. For further info check: www.facebook.com/pages/ravens-creed-official/264464176902353, www.xtreemmusic.com