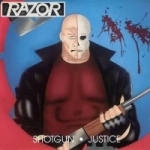 Canadian Thrash Metal in the eighties was nothing unusual, but always happened in the backseat of the common Thrash Metal movement. Bands like SLAUGHTER, SACRIFICE or INFERNAL MAJESTY released amazing material though never had a commercial breakthru or got a huge following outside the die-hard-fan-regions. RAZOR can be added here without any further comments, though I have to admit I’m not the biggest expert when talking about RAZOR. The RAZOR albums were always kinda hard to get, I own their “Evil Invaders” album and up to now hold on to the opinion that this album kicks some serious ass. Besides that I only had the “Violent Restitution” album in my collection. “Violent Restitution” is a pretty good album, though it misses the rude charm of “Evil Invaders” as well as the cult factor, offers technically (and considering the songwriting) the better material and is realised and performed in a more professional way. Basically in the same direction as “Violent Restitution” tends their 1991 album “Shotgun Justice” which I hold for reviewing in my hands now. With “Shotgun Justice” the era of their old vocalist Stace McLaren ended and the new vocalizer Bob Reid replaced him. So what we get on “Shotgun Justice” is a Thrash Metal album perfect for fans who like late 80s and early 90s Thrash Metal. Mangy, crude and violent, offering plenty of cool riffs and great songs as the perfect feed for hungry Thrash Metal maniacs. Unfortunately this album was released in a time when Thrash Metal was not the big thing anymore and most fans craved for the next Death Metal “sensation”. You can see that as they didn’t find a bigger label who took care of this release (“Shotgun Justice” was originally released on Fringe Records), whereas “Violent Restitution” was released on Steamhammer! But a good record is a good record, no matter in which year and during which trend it was released. The music played on “Shotgun Justice” is not the most original one; it is straight Thrash Metal, an almost break-free album considering the way of drumming, what suits well to those catchy songs. The riffs itself are cool and the vocals fit perfect for a Thrash album – won’t compare the old and new vocalist with eachother – decide for yourself which one you prefer. There’s nothing to complain about this album. If you are a fan of 80s Thrash Metal this is an album you won’t regret to carry in your collection. As this is strictly limited to 500 copies and I’m sure that just a few of them are left I can give the well-meant advice that all vinyl junkies should contact High-Roller-Records to order this piece of Thrash Metal as long as it is available. Comes in strictly limited edition of 500 pieces. Available through www.high-roller-records.de.