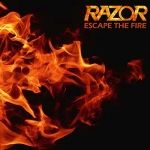 RAZOR is the kind of band that should be bigger, but for whatever reason stayed a bit in the shadows. If some words define the band, it’s that they play brutal Speed / Thrash taking no prisoners. The history behind this recording is that it was supposed to be the follow up to “Armed And Dangerous”, but it ended as a pre-production for their debut album. Well, the songs are the same ones found in their debut, just in a different order, and obviously with a different production (well, not really: ‘Metal Avenger’, ‘Heavy Metal Attack’, ‘Frost Bite’ and ‘Ready For Action’ are all exclusive to this release, that got replaced with ‘Take This Torch’, ‘Fast And Loud’, ‘Hot Metal’ and ‘The End’ on their debut album “Executioner’s Song” – Frank). Sometimes I think the reason why RAZOR was not as big as similar bands is the fact that some of their songs sound quite alike. Not that it is a bad thing, but back in the day most of the Speed / Thrash bands that really stood up had quite more variety in their songs. They have a definitive old Heavy Metal sound in their music, as well as many traditional Hard Rock vibes. As a matter of fact, I think RAZOR is a very big influence for many Japanese bands. Besides some minor different things, and a more raw vocal approach, I do prefer the version that ended up as the proper debut album, although it has its charm and the remastering by Patrick W. Engel is as always fantastic. I still think RAZOR has a very decent catalogue, and live they are a band to really watch, very energetic and they surely still can thrash the floor with some of the newer bands. My fave album from theirs will always be “Violent Restitution”. This recording is for collectors and die hard fans of the band. www.facebook.com/razorofficialthrash, www.facebook.com/hrrecords