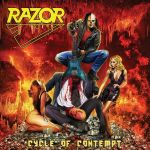 “Cycle Of Contempt” is the ninth full length album by the legendary Canadian Thrash Metal band RAZOR. A total of 12 new songs for almost 43 minutes of old school, fast and aggressive Thrash Metal in its purest form. There’s a touch of Speed Metal too, as usual in the Canadian scene. This new album has been released by the cult American label Relapse Records in various formats: digital, vinyl, tape and CD. This is top quality first-rate Thrash: the perfect soundtrack for a riot or a bar fight. The lyrics deal with violence, hatred and social issues. The drumming is a non stop version of the true euroblast style with some double bass parts, rollings and few slowdowns here and there. Violence and velocity are the trademark of the rhythm section, that is solid and intense from beginning to end, as well as boasting an audible bass too. Bob Reid’s vocals are vicious, raspy and aggressive. Dave Carlo is still the extraordinary riff machine we well know. The guitar work is dynamic, direct, fast and brutal. A cut-throat overdose of Thrash Metal madness, played with skill and competence. RAZOR make modern Metal bands look like posers. “Cycle Of Contempt” is a killer Thrash Metal fest, a mandatory addiction to any extreme Metal collection. The cover artwork is killer too, a gory and sick tribute to the “Shotgun Justice” album. In my opinion RAZOR are the godfathers of the Canadian Thrash Metal Big Four along with INFERNÄL MÄJESTY, SACRIFICE and EXCITER. For more RAZOR information please visit: www.facebook.com/razorofficialthrash, www.facebook.com/relapserecords