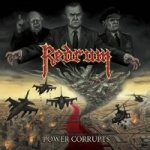 REDRUM hail from Sacramento, California. This CD “album” was originally released in 1989 by the band’s drummer Mike Parisi, on his own Shred Recordings. Featuring 13 songs of above average Metal / Thrash heavily inspired by such Bay Area legends of that time as DEFIANCE, HEATHEN, TESTAMENT and EXODUS. Coupled with unquestionable injections of ATROPHY and SACRED REICH. Considered more as a sampler or a “demo CD” than an actual album when debuted, what with its simple layout and just plain black front cover (no artwork) including a foil stamped band logo and title, and as all the titles were from their two previous demos: the 5 song “Power Corrupts” and the 7 song “Disarm And Survive”. Those of us who lived here at the time always thought these guys should of made the jump to San Francisco or to L.A. years prior to this CD being released. In our eyes they could of easily gotten a deal out there with a major record company than here. Better than LÄÄZ, better than XENTRIX, better than WRATH, better than C.I.A., POWERMAD, MELIAH RAGE, WRATHCHILD AMERICA, LUDICHRIST / SCATTERBRAIN, better than EVICTION, FAITH OR FEAR, UGLY KID JOE, better than a whole host of bands that were getting picked up back then. Once you hear the recorded songs on this disc you’ll agree too that why REDRUM were constantly overlooked makes zero sense, even to this day! The CD version of “Power Corrupts” from Evil Legend Records has all the tracks from the original CD (although in a different running order), it has actual cover art this time around, a revamped REDRUM logo, an altogether superior layout and tray card, complete with color graphics, photos, flyers and a short bio of the band as well. Not to forget two live shows (7 songs in total) from two old clubs that sadly don’t exist anymore; the El Dorado Saloon and the Oasis Ballroom. In more recent news REDRUM have reformed as of 2005 / 2006 with guitarist Vonnie Groccia as the only remaining survivor of the early days and he has a new lineup together working hard to get the band back up on its feet once again! Contact REDRUM: gagroccia@hotmail.com or www.evillegendrecords.com