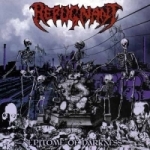 If REPUGNANT are the masters of Death Metal can be questioned. I think you need at least more than two albums to even be considered. And then the music must be top notch, and not a second hand copy of something that’s already renowned as a classic. “Epitome Of Darkness” is not a classic at all, but it has the ingredients that are needed to make a worthy Death Metal album. The sound is rotten to the core, like we remember from the classic “Mental Funeral”, the vocals are equally dirty and the over atmosphere reeks of putrefaction. The first few spins didn’t offer much, as the album sounded more or less like one long song with just a little variation. However, if you’re patient and manage to move behind the rather chaotic sound, you’re invited to an epitome of darkness. Normally I sense that Black Metal has more to offer on the darkness part, but REPUGNANT is not one of your common over-produced Death Metal albums that plague the scene. By all means, it’s perfectly fine with a clean production, but you don’t sing “eating from a coffin, eating from a grave” if you let some renowned producer of albums like the DEICIDE albums, DECAPTIATED’s four full-lengths or VADER’s recent releases touch the magic. Which doesn’t mean I don’t like VADER’s new album, because I really do. But the clean production doesn’t suit REPUGNANT’s filthy Death Metal probably done the way it was meant to be in the beginning. However, we’re closing in at autumn 2006 now. And to be frank with you I must admit that despite the feeling of death I would rather play AUTOSPY’s “Mental Funeral” or even “Servered Surivial” over and over again instead of “Epitome Of Darkness”. If I had to choose, that is. But I don’t have to, so nine out of ten times I choose AUTOPSY and then, just for the sake of variation, I play REPUGNANT the tenth time. www.soulsellerrecords.com