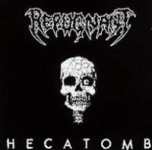 Old school fuckin’ old school. This young Swedish band delivers finest Death Metal with a huge Thrash touch or if you want finest Thrash Metal with a huge touch of Death Metal. It depends on your point of view. However, “Hecatomb” is pretty much amazing and glorifies the good ol’ days of both styles. There are two kinds of bands these days which try to catch the old feeling. On the one hand we have “retro” bands which only care about the image and steal the old riffs and on the other hand we have bands such like PENTACLE, CRIMSON RELIC or even REPUGNANT who really dig the feeling and praises the old days without ripping off their heroes. REPUGNANT is surely influenced by the great old ones such as DEATH, KREATOR, CELTIC FROST and POSSESSED. But they play their own songs in that old fashioned style. And that’s what “Hecatomb” is all about, a tribute to the mighty past. They also recorded a bursting version of CELTIC FROST’s ‘The Usurper’ for this EP which fits well to their own compositions. I saw REPUGNANT live on stage in Eindhoven/Holland opening for MACABRE some months ago and must say that this kind of music really kills in a live situation. “Hecatomb” was originally released in 1999 as a 7″ in co-operation of Dead Monkey Records and To The Death Records and now Dutch Hammerheart released it on CD. On the CD version you can find an extra track called “Rapturous Genocide” which is a new recording of an old demo song. I’m wondering why they use pseudonyms on the MCD instead of their real names like on the original 7″. Who knows…? But I definitely know that “Hecatomb” is worth your attention, so check it out.