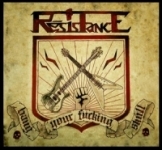 According to their Myspace page, “If you like it epic and aggressive, RESISTANCE might well be your next cool discovery of the month!” This is a bold, albeit trite, statement, but one which their debut album fails to live up to. There’s actually little to “discover” on “Bang Your Fucking Skull” (an album title so cliché its hard to believe no one has used it yet). France’s RESISTANCE play standard Thrash Metal with strong Heavy Metal and Power Metal influences (they cover ‘Necropolis’ by MANILLA ROAD if that’s any indication of their musical direction). The instrumentation is competent enough; the songs are well-played and demonstrate at least a certain level of technical proficiency. Yet, there is nothing here that hasn’t been done many times over and often done much better. The real problems with this album lay not in the playing or the songwriting though. Ultimately, what holds this album back is the production – slick, yet one dimensional and refined – and the ever-present and overly theatrical vocals. The vocals on this album generally vary from baritone Power Metal to gruff crossover Thrash style vocals and quite a few other styles in between. Unfortunately, this little experiment leaves much to be desired. The vocals are often so over the top and ridiculous that it becomes impossible to enjoy the music altogether. I can respect the effort to try something a little different, but one cannot award points for experimentation (if indeed that’s even what this is… it may just be bad taste combined with lack of talent) when the experimentation produces such weak results. However, there are some instrumental passages throughout the course of the album where the band’s talent carries the weight of the album and one can perhaps enjoy a solid thrashing attack; however, all too often, just as I am letting my guard down and beginning to enjoy it, the vocals return and drag the album back into the realm of the disappointing and dull, if not utterly annoying. Of course, RESISTANCE are not alone in their efforts to revitalize this Metal subgenre, and it should probably be noted that they have been getting some attention as of late (their Myspace page also lists several tour dates at which they will be supporting U.S. Thrash act, FULED BY FIRE). But for those who prefer their Thrash to be raw, evil and primitive as opposed to technical, polished, and fun, RESISTANCE have little to offer. Contact: www.myspace.com/resistance667

RESISTANCE - A Tale Of Decadence - by Michael Tak