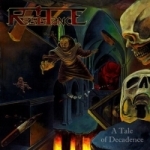 Emanes Metal Records is quite busy supporting the international Metal Underground with a focus on the more conservative side of Metal. Just look at the album covers and logos of featured bands like EXCALIBUR, HURLEMENT, LONEWOLF, GAE BOLGA and RESISTANCE. Just like a leap back in time. The band is clearly doing their own thing and has the courage to step from some trodden Speed / Thrash paths. After their debut from 2008 “Bang Your Fucking Skull” and the split EP “Metalheads United” with HIRAX from 2009 this is another strong effort. Some intros with satanic invocations (‘A Premature Burial’ and ‘Conjurer Of Fate’) or clean vocal parts that appear occasionally. This is part of the concept that is inspired by the Gothic novel “The Monk” by Matthew Gregory Lewis. Well, I prefer to let the music do the talking, ’cause that’s what they do best. Epic Speed / Thrash Metal combined with Heavy Metal and Rock parts done by competent musicians. Drums for example are awesome and executed by the Ilmar Marti Uibo from the sadly defunct BLOODY SIGN. The production is clear and powerful. The vocals are the main distinguished element on “A Tale Of Decadence” with clean Viking Metal like shants variating to brutal non growling / grunting ones. Kind of MASTODON heaviness like and rather cool. For the rest it’s a decent and passioned slab of Metal. Tight and convincing, fast and intense. Because of the vocals, I advise you to check first on www.myspace.com/resistance667. For more info you can also check www.emanesmetalrecords.com.