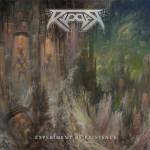 Only two years after the brilliant debut “Raising The Corpse” RIPPER are back with their second onslaught entitled “Experiment Of Existence” which is quite surprising since it’s not that common to release records at such a fast pace anymore while maintaining such high quality. “Raising The Corpse” was beyond great, a killer Death / Thrash hybrid with riffs that literally melt off your face but “Experiment Of Existence” is a whole different story. It’s fucking unbelievable how well accomplished their musicianship is at such a young age. The debut already had its technical edges here and there and you kinda knew what might to expect on future releases but “Experiment Of Existence” is beyond everything you could have imagined. The songwriting is simply perfect, the tightness unbelievable, they somehow managed to dig up Steve DiGiorgio 2.0 (I guess reading this will make the bass player quite happy hehe) and on top of that lies the perfect production. I can’t understand how so many people praise the shit out of soulless, digitalized and compressed stuff like VEKTOR while the ones who’d deserve it fall by the wayside. Unfortunately this is a different story, so let’s get back to the important stuff. To put it straight “Experiment Of Existence” is the perfect record for everybody who is into the more progressive era of DEATH, SADUS after their first record or every other weird shit with unfollowable song-structures and almost no repetition of any riffs used throughout the songs – this is pure controlled chaos which is such a pleasure to listen to. I would really like to discuss all of the songs but it is simply impossible to do that with a playing time of approximately 45min filled with 10.000+ riffs. The best thing for you to do now is to get up your lazy asses, support this brilliant young Chilean band and buy this masterpiece of a record by visiting www.facebook.com/pages/ripper/184894808268524 and www.unspeakableaxerecords.com.