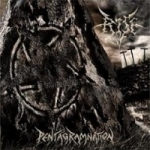 How is it possible that this California-based Death Metal trio called RISE, has managed to stay in the dark shadows from me for so long, without me seeing even a glimpse from them for all these passing years? The band has been active since 1992 with different lineups – and already released 4 full-length studio albums on their own (the band is on an undefined hiatus at the moment as I am writing this). RISE’s latest studio recording, titled "Pentagramnation", is a pure ace stuff as far as innovative, strongly executed and extremely thought out Death Metal is concerned. I mean, it feels almost criminal that they have released this record on their own, without any label support behind them. I mean, "Pentagramnation", as wholeness, is a truly majestically moving Death Metal opus with some slight Black Metal overtones added into it – mainly due to some light keyboard parts that have been cleverly sunk into their songs. These keyboard parts have – in fact, really added a nice symphonic touch to the songs, occasionally reminding me of some early DIMMU BORGIR’s stuff here and there but not any disturbing way at all. Plus, to lighten their sound a bit here and there, RISE have also used some acoustic interludes in their songs (check out especially the title track of the album, ‘Pentagramnation’), which they have actually done really well and carefully, kind of lighten their sound after those parts when they have catapulted a full load of crushingly heavy Death Metal straight to the listeners’ faces. When people get to listen to this brilliant record, I am sure some references to bands like MORBID ANGEL, VITAL REMAINS, DEICIDE and possibly even DIMMU BORGIR are being made. Sure, undoubtedly some of these influences can be spotted within RISE’s stuff too but it’s still hard to raise a pointing finger against them – and say, they sound like a rip-off this or that because that simply would not be the truth there about them. Guitar solos, that both vocalist and guitarist István Lendavay – as well as such ‘unknown guest guitar wizards’ on this record as James Murphy and Dave Suzuki, have sown everywhere around this record, are true pieces of shining diamonds – so amazingly and rigorously played that should make many of us envy them. Also, Angela Gossow (ARCH ENEMY) makes her guest appearance in the last song of the record. This blackish and very melodic Death Metal song is called ‘Opus Requiem’, in which Angela truly screams her inner demons out of her lungs the way that makes cold shivers run down my neck at least. She sounds like she has transformed herself into one vicious demon in this track. I am pretty fuckin’ impressed how downright demonic and evil she actually manages to sound like in this very track in question. Lastly, I don’t think a bit it’s any exaggerating to say but "Pentagramnation" is absolutely one of the most outstanding Death Metal albums that I have had a privilege to hear in my whole life. This band should once share a stage together with MORBID ANGEL to show Mr. Azagthoth and co., how Death Metal sounds at its best. At the same time they would also do a favor to the latter mentioned camp – and perhaps in the very best scenario even bringing some poignant reality to the ‘morbid ones’, who actually knows. Nevertheless, now go and kiss your pentagrams at: www.risedeathmetal.com or www.myspace.com/risedeathmetal