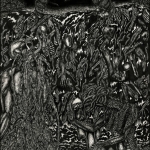 In the last few weeks, I heard a lot of new Death Metal bands from the US of A with a distinct edge of Doom Death. The next fine band that fits in this line is the one man project RITUAL CHAMBER from San Francisco. This band is the brainchild of Numinas (a.k.a. Dario Derna) of KROHM and formerly EVOKEN and INFESTER, among others. Since this multi-instrumentalist is a skilled drummer as well, “The Pits Of Tentacled Screams”, the first RITUAL CHAMBER demo, doesn’t suffer from a clinical drum sound. Good point, ain’t it? The guitar sound of this demo is extremely downtuned and produced in an absolutely raw sound, making the five mostly long tracks a joy for all those into those old demo recordings. And the songs themselves pack a punch either, be it the rather complex opener ‘The Dawning Of A New Inversion’ with its faster breaks or the rather monolithic ‘Glorious Curse Of Almighty Death’, in it’s majority heavy as hell. ‘A Thermonuclear Fate’ opens up with guitars in 1980s tones and keeps a feeling of that decade, with certain resemblances to the mighty first CARNIVORE album, or is it just the song’s name that makes me think so? The closing two longer tracks ‘Black Rites Of Conjuration’ and ‘Nomad Daimons’ stylistically fit to the demo in a perfect manner, the latter being a complex and worthy last track with weird guitars in the end that makes you want to hit the start button again. So, if you’re into some rude and doomy Death, check RITUAL CHAMBER out at ritualchamber.bandcamp.com or www.facebook.com/theritualchamber. Besides the tape version (Nuclear War Now!) and the vinyl version (Duplicate), there also is a CD version available now. Hellthrasher Productions are in charge for it, so you might also check their site as well: www.hellthrasher.com