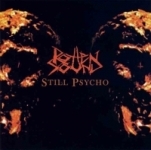 Based on Schenk’s review for the previously issued “Drain” album by these Finnish Grinders, this mini CD quite obviously must already be (at least) their third release. It’s not only the first for the Necropolis sub label Deathvomit Records but also the first that I got my hands on. And you know what? I really like what I hear! It’s indeed very fast grinding Death with some Crustcore elements, but never to the extent that pure Death Metal maniacs necessarily should avoid this. The band delivers five really intense and incredibly devastating own compositions and a well done cover of the old CARCASS classic ‘Reek Of Putrefaction’, everything’s powerfully produced and always performed on a high musical level. If that’s not enough to convince you, let me tell you that the disc comes up with nine additional video (!) live tracks, which I didn’t like as much as the studio material due to the different sounding vocals which unfortunately have a slightly bigger Hard- / Crustcore approach. But as you can’t play those on your regular CD player it shouldn’t really be a problem and you can still immensely freak out on ‘Perfection’, ‘Ignorance’, Strong Man’, ‘Disinterest’, ‘Lack Of Awareness’ and the aforementioned CARCASS cover! All in all an extremely cool, yet way too short release.