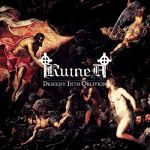 The chilean scene has brought us high quality Metal since mid the 80s, but this last decade has been a complete explosion with a real wide range of bands, but just a small number comes to mind in the Doom Metal facet. Just check the past 25 years with names like (early) BEWITCHED, POEMA ARCANUS, BITTERDUSK, PROCESSION, etc. But thanks to Chile based Canometal Records we can add another great name to this rank, Puerto Montt based RUINED, an epic Doom Metal act in the vein of SOLITUDE AETERNUS (their main influence) and CANDLEMASS. The band has a brief discography since its inception in 2011, a demo titled “Towards The Candles”, a single “Domains Of Death” and their debut album “Descent Into Oblivion”,which we have received courtesy of their label. This amazing record is composed by seven tracks, as I previously cited, highly influenced by the early works of american Doomsters SOLITUDE AETERNUS with touches of CANDLEMASS, SOLSTICE (UK), WITCHFINDER GENERAL… Epic Doom Metal from head to tail!! ‘Reflections’ reminds me a lot of early BEWITCHED (Chile) in their demo days, ‘Domains Of Death’ has the atmosphere of ‘Into Depths Of Sorrow’ by SOLITUDE AETERNUS. The production fits the whole concept, reminding of the classic Doom Metal bands from the late 80s / early 90s. The band is currently working on an upcoming release, a three song EP blessed with guest vocals of Simon Matravers (ex – SOLSTICE), to be released in the next months. The band is also hard working on their sophomore and a three way split album, scheduled for 2018. To be honest, to add more words is unnecessary, because this album speaks for itself, epic Doom Metal at its finest! I can only anticipate a real bright future for this 4 piece act. For all additional band information check out: www.facebook.com/pages/ruined/891109494274047, label contact: www.canometal.cl