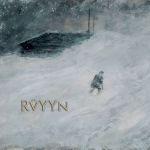 Let me just sum this album up in one word… Goddamn. No need to read anymore if you don’t want to. But if you do, I’ll be happy to explain my reaction. When it comes to one-man bands, it’s hit or miss. There’s usually no middle ground. Either you sound like an actual full band, or you sound like an outdated Casio from the eighties with tin-sounding programmed drums with weak guitars added into the mix. In this case, it’s the former. Romaine Paulets’s RÜYYN is the sound of bliss. It’s the sound of pure Black Metal at its finest. And with only this self-titled album as the band’s one release, it’s damn impressive. The album begins with ‘I’ (as in the Roman numeral). Perfect Black Metal screams deliver impure agony and angst as the guitars shudder and buzz and the blastbeats thunder at rapid velocity. ‘II’ is sort of a mid-tempo track that, though it doesn’t really deliver anything new, it does exactly what it needs to do. The atmosphere is there. The rhythm is steady. And the darkness is abundant. ‘III’ quickens its pace with a warble of aural intensity that harkens to Black Metal sensibilities at its best. And ‘IV’, with its panic-filled riffs and catastrophic drumming hit us over the head with proof that RÜYYN is a force to be reckoned with. And the fifth and last track titled ‘…’ (yep, the band changed it up), is an extremely brief keyboard-filled ending that ties up the 29 minute album nicely. RÜYYN is what we need. Fuck experimentation when all we wanna do is bang our head and destroy things. Fuck trying to move the genre forward into a reality that isn’t wanted. RÜYYN has succeeded in its Black Metal mission. And that’s all we really ask for. Romain Paulet, thank you. For more info, check out www.facebook.com/ruyyn.official, www.facebook.com/ladloproductions