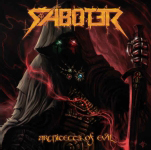 The good people of No Remorse Records keep on in their quest for releasing quality Metal, and here they bring us the second album by Greek band SABOTER. They play a somewhat technically complex Heavy Metal, with lengthy songs in which a lot of things are happening. There is a little bit of a modern tinge to it in production, composition and melody that does not affect the genuine feel to it. Listen for instance to all the harmonies around the soloing in the title track. There is indeed a kind of fusion between bare-bones traditional eighties Heavy Metal and the far more melodic and anthemic music of a subsequent decade. The riffing is often very busy and impressive, giving birth to stylish solos, all within a very competent rhythm section. There is also some variation to be found… ‘Rose Red’ can be even quite emotional, and right after, the following track, ‘Golden Owl’, is far more to the point (being even the shortest of the long songs in the album), with very fast drumming, but never leaving behind the band’s sophisticated and complex musical aesthetics. Right afterwards we go into ‘To Glory We March’, with an operatic choir of majestic proportions and a sung intro of clear MANOWAR influence, developing into a hymn about horseback warfare and conquest. The album is almost megalomaniac, and indeed there is a boldness that may occasionally prove to be a little too daring for its own good, but they do hit the mark at great songs such as ‘Sword Of The Guardian’. A good album with impressive composition work that will appeal to fans of bands like MYSTIC PROPHECY and the likes. Verify it at www.facebook.com/sabotergr, www.noremorse.gr