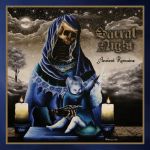 There are tales that speak of frost and fire. In other words, tales of bands that decide to split their sound into two different pieces and strive to make everything work seamlessly. SACRAL NIGHT from Grenoble, France have some very good credentials on paper, with some of their members being former or current acolytes in Death Metal destroyers NECROWRETCH or in the cult Heavy combo SANCTUAIRE. Still, if only the music was as good as some of the lyrics (check out the following imaginative verses from ‘The Last Decade and Beyond’: "An oxidated smell is running / through their lies / The withdrawn quarry / Falls from pharisaic / court into whim"), we’d have a memorable record. I won’t say this is a totally bad album, yet there’s something missing. You get good songs such as the aforementioned track or ‘Ancient Remains’, with its "Somewhere In Time", IRON MAIDEN – esque style intro riffing, and then you have awkward twin guitar arrangements that just don’t work, as you can hear on some portions of ‘By Sword, By Pick, By Axe’ or ‘Unhinged Before Horror’. Picture an effective singer in the vein of VIRGIN STEELE screaming his lungs out in epic fury on undecided Black Metal or IN SOLITUDE – inspired riffs without any coup de théâtre. The formula is quite hackneyed, with far too many "melodic line on one side, chord on the other" sections, a tight but overshadowed rhythm section and scarce compositional suspense. SACRAL NIGHT could be an interesting band if they only focused more on togetherness and songwriting. Wrapped in a haunting cover art by Tobias Könemann, "Ancient Remains" is out now on CD through the hard-working Italian label Metal On Metal. Come taste the band on Facebook at  www.facebook.com/sacralnight or send your regards to their patrons at www.metalonmetalrecords.com.