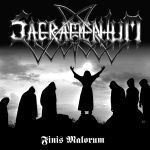 I’ve known about the existence of SACRAMENTUM for quite a while now – the debuts blue-ish, icy Necrolord cover artwork and a very spiky looking logo combined with their Swedish origin always conjured a profile of “probably something like DISSECTION” within my head. Since I’ve never heard a single note of that band before, what better way to introduce myself with their music than to start from the very beginning with their “Sedes Impiorum” demo tape from 1993 and the “Finis Malorum” EP that followed a little later in 1994. Vic Records however released this compilation as an EP re-release that features the demo as a bonus as well as two additional cover-tracks (MERCYFUL FATE’s ‘Black Masses’ and SEPULTURA’s ‘The Curse / Antichrist’). The EP itself basically showcased what I already had in mind. SACRAMENTUM play a very melodic kind of Black Metal that is not that far off of what DISSECTION did during the 1990s. But the material is by far no rip-off / clone in any way. It’s more like a JUDAS PRIEST / IRON MAIDEN thing where both bands are the same on paper but yet completely different in reality. The five tracks on “Finis Malorum” display some great musicianship as well as very effective songwriting. The difference to DISSECTION’s early material is that SACRAMENTUM do not focus on riffs and leads only but also add a lot of very great drum work into their songs. Kim Ruzz was definitely present in spirit when the material was written. The demo however is very different as the band’s sound was still heavily rooted in Death Metal. There’s down-tuned guitars, deeper and more guttural vocals as well as a rawer approach in general that probably focused on heaviness rather than atmosphere. The compilation is definitely a great way to get to know the band and works more than fine as an initiation into the world of SACRAMENTUM. You can find more information over at www.facebook.com/sacramentumofficial or www.vicrecords.com.