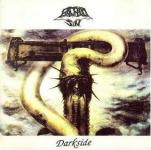 This reissue of SACRED SIN’s debut album “Darkside” struck me with quite some surprise since I listened to it for the first time absolutely unaware it was a 25 year old release, and what an album it is! I’m not sure of the impact it caused when it was first released, but for the ones out there still digging albums of the past, this is definitely worth checking!!! “Darkside” is a Death Metal album clearly influenced by classic American Death and Thrash Metal bands, but I just couldn’t be more pleased by my uncertainty when trying to figure out what other band it really sounded like. There’s the rapid and violent approach of many other Death Metal bands of its time but also a touch of obscurity in both the slow paced riffs and agonizing voices, that did seem to be a lot influenced by a mix of John Tardy and Chuck Schuldiner styles. Some of the intros in between the songs made me think a lot of “Rites Of The Black Mass” by ACHERON too, bringing up the clever use of keyboards setting the atmosphere. This is definitely the old and gold Death Metal that doesn’t require either the use of blast beats or the extreme precision that eventually have been added in the Death Metal range of descriptions of today, but a rather twisted and energetic discharge of heavy music played mostly with rage and guts (which for South American bastards like me, it certainly strikes a chord!). The timbres are particularly interesting, with the slightly high pitched snare and all the rest quite muffled in a way that simply cannot be emulated nowadays. The band reformed in 2011 after a 2 year hiatus but haven’t released anything new since 2009. However, judging by the bonus track in the end of this reissue, they seem to have shifted quite a bit with some sort of experimentalisms in the VOIVOD vein. So if you’re going to check this Lusitanian gem, make yourself a favour and start with this album. You can do it by checking out the following links: www.facebook.com/sacredsin666 or www.satanath.com