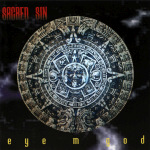 This album, originally released in 1995, is brought back two decades later in a new edition by Satanath Records with a somewhat different cover artwork (but equally not very good). SACRED SIN was the most important name in Portuguese Death Metal, and they may very well still be. “Eye M God” is the follow-up to their groundbreaking debut “Darkside”, and it is an evolution along the same path. This is the kind of Death Metal that you got in the early 90s, when bands had identity, even when they were heavily influenced by MORBID ANGEL, as it is the case here. Instrumentally flawless (Pica and Nishal were a formidable guitar duo), they deliver track after track of lethal Metal, with intricate songwriting, aggressive delivery, excellent vocals and added keyboards for atmosphere (they had a full-time keyboard player back then). There is actually a lot of ambiance added in-between the heaviness, most notably in tracks such as ‘Death-Bearing Machine’, which has absolutely remarkable solos and “cosmic” keyboard parts, or ‘Guilt Has No Past’, with such similarities to what BAL-SAGOTH would later do, or ‘Link To Nothingness’, with some winks to CYNIC. Elements such as sounds of nature and spoken female vocals show up along the album in contrast with the pure Death Metal parts, but everything blends well, notably with the keyboards and those amazing guitar parts. Still, heaviness is never compromised by this, and the result is crushing. Not many underground bands were able of crafting such a record back in 1995. SACRED SIN may never have achieved the recognition they possibly deserved, so it is most adequate that this album is brought back to life in a new edition. Highly recommended for fans of old school Death Metal. Learn more at www.facebook.com/sacredsin666, www.satanath.com