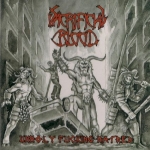 If you read the title and name of the band, see the cover art, then you will have an idea of what this sounds like… demented blackened Speed / Thrash Metal, with a quite Brazilian flavor that suits them very good. They reminded me of MX and early SEPULTURA with the obvious SLAYER touch, and some more melodic Metal bands like let’s say OMEN. The guitar player is quite skilled for what he is doing. I would avoid using the Black / Thrash denomination for this American band as they have A LOT of old school Speed Metal in their veins to just think of them in any other way. Quite simplistic, yet great style. Their Death Metal influences goes for that of the more stripped down style, think SLAUGHTER and very early DEATH. And they never let the Speed Metal influences go away. Their approach at the sound reminds me of early VOIVOD and the band also claims to have influence of those Canadians. So, this album is a quite very effective, it deserves doing a devil horn in one hand and having a cold beer on the other (the cover songs of RAINBOW’s ‘Kill The King’ and RIOT’s ‘Warrior’ should have been excluded from the album though, since they don’t do justice to the originals at all – Frank) . I see they have a new album out, so it might be a great idea to look for that one too. Unholy Speed’n’Rock Alcoholic Metal! Play it LOUD! www.facebook.com/pages/sacrificial-blood/106953582665049, www.ibdclabel666.bigcartel.com