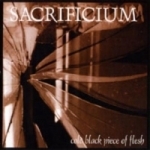 Well, you really got me Frank! This is a hard test on how objective I can be… SACRIFICIUM play White Death Metal, what the hell!?! Writing something good about such a band would be the same kind of treason if I’d write something positive about Borussia Dortmund as a native Bochumer! That is simply impossible… As ridiculous as this might sound I don’t mock the Christian religion just for fun, so SACRIFICIUM’s ideological concept appears seriously disgusting to me, but I won’t discuss it any further here… Musically the band does not do a bad job though, powerfully produced, not too brutal nor too fast yet pretty heavy Death Metal dominated by a vast mixture of emotions ranging from Doom-inspired depression to raging aggressiveness. The vocals are nicely deep and natural and who does not like this fast blasting Death Metal violence, but moodier stuff with lots of variety and a convincing mix of up-tempo and mid-tempo passages might really enjoy SACRIFICIUM. The guys avoid letting melody getting overhand, add a couple of thrashing parts to keep their songs “bang-able” and deliver a solid piece of individual sounding Death Metal with their debut “Cold Black Piece Of Flesh”. Check it out if you like, I hope I succeeded in coming across as impartial as can be… More infos on www.sacrificium.com. Praise the Lord!!!