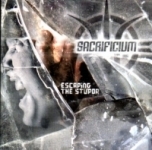 The massive release wave of Greek Black Lotus Records seems to have a special interest in the Swabian Metal underground, cause after signing LUNA FIELD here comes another thirsty band out of the Stuttgart area. SACRIFICIUM are not new to the scene cause since 1993 this five piece did several demo releases as well a full length being released back in 2002 via Whirlwind Records. I remember that this band had some roots and attidudes being related to the so called White Metal scene, but instead of losing space and time I prefer to let the Metal do the talking!!! “Escpaing From Stupor” is a basically well arranged and written modern Death Metal album with a crytsal clear production, so if you have the attitude that Death Metal needs a rough, unpolished and brutal edge then go further. In some way SACRIFICIUM have some really nice old school attributes revealing to old British heroes like BOLT THROWER in terms of heaviness and double bass attacks and the growl type vocals defintely deliver some power, which are the truely delightful sides of this album. The other side of the material is a mixture of a massive Gothenburg touch, mostly inspired by older bands of that scene, but in some way they harm the brutality of the above mentioned influences and I also feel some modern Metal vibes in the vein of EXTOL, who already shared the stage with SACRIFICIUM. SACRFICIUM aren’t doing bad, actually I think that this is defintely one of the better releases that have been unleashed from the South German underground scene in 2005, but on the other hand I think that these girl and boys will have some difficulties stylewise, as it’s a bit in-between the chairs, so I can already hear the die hard Death Metal league demanding more brutality and the softer freaks for arguing the other way. But what counts is that SACRFICIUM managed to deliver quality, which is essential in these days of the releases overkill. Check out a sample at www.sacrificium.com