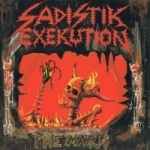 To me this always used to be the only great SADISTIK EXEKUTION release, which unfortunately was kinda hard to find throughout the last couple of years. So I was more than happy when I found out that it was finally re-issued on a more established company most recently. "The Magus" was the debut of these Australian sickos and as far as I can remember the recordings of it already date back to 1988 (even though the Osmose booklet mentions 1986, which I doubt as it was SADISTIK’s year of origin…). But you better not quote me on that and maybe it’s me who’s wrong here…?! Or ask Metalion, haha… Anyway, fact is that this CD originally came out in 1991 on the rather small Australian label Vampire Records and features a good dose of crushing old school Death Metal, performed in a very primitive and raw manner. The production is kinda poor and so is the playing, but the band managed to capture the right feeling, and that’s what I enjoy a lot more than an overall perfectly produced record which is completely lacking in soul. A song like ‘Agonizing The Dead’ (which is my personal fave on "The Magus") definitely represents this musical genre a lot better than most of the songs that were written by countless bands over the last couple of years. In a way the material on this album reminds me of stuff that several bands from Brazil used to come up with at the time and is probably a lot closer to very early SEPULTURA (circa "Morbid Visions") than to all the stuff that came out in the US or Scandinavia back in those days. So, even if you never really liked SADISTIK EXEKUTION’s follow-up releases (like me…), you should give this a listen. You might be surprised in a positive way! Apart from the packaging (which looks kinda poor and certainly could’ve been better) this re-issue makes a lot of sense and therefore is highly recommended from my side!