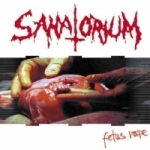 Okay, this is meant to shorten the time until the release of the upcoming album "Celebration Of Exhumation" some time in spring 2004. It’s a 6 tracker with one song (‘Killing’) from "Infernal Womb Cannibalism", two from "Goresoaked Reincarnation", namely the title track and ‘In Capture Of Necrophile Visions’ plus three brand new one from the upcoming full length. ‘Oral Fistfuck’, ‘Violent Intercourse’ and ‘Fetus Rape’ are absolutely typical for modern ‘frognoize’ although I have to highlight a short, doomy old school riff on the first song. The vocalist doesn’t really do the frog thing, either. Still it’s the typical slammy grooves and one can imagine the musicians in baggy pants and everything. Apart from that, I tend to get bored by this style pretty quick and ask myself: is the vocalist ashamed of his lyrics so it’s impossible to understand? Looking at the titles I guess he’d better be. For fans this CD makes no sense as there are no exclusive tracks on here. Others may take "Fetus Rape" as a cheap first step into the world of SANATORIUM. If you can’t get enough of this style I don’t see any reason why one shouldn’t buy SANATARIUM. The reason why you probably don’t need this CD were already mentioned, so buy or don’t. www.sanatorium.info.sk