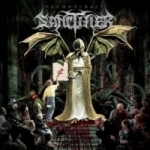 Yet a blast of madness from this brutal Brazilian Death Metal band, their only second full length album since their inception in 1989, even though they’ve been quite busy releasing demos and splits throughout the years. Think of a heavier and more weighted version of KRISIUN and add some darker US Death Metal bands, then you’ll have SANCTIFIER, as brutal as mentioned band, at times as fast, though mostly more heavy and relentless, a pure attack of brutal intensity from the very beginning to the end. The songwriting is what keeps this album going, very well made songs that vary from bottom down simple and heavy Death Metal to fast and blasting pieces to technical shenanigans making it all interesting. And then the guttural growl from the netherworld, a kick in the groin, working really well in this context, backed nicely up by various chorus grunts and screams. A quite interesting and surprising attack from the Brazilians as I didn’t expect such a strong and well crafted album from them already. "Daemoncraft" offers a tad more than the usual of the rack Death Metal release, as the bastards in the band deliver their music with tons of passion and intensity, quite simplistic at times, but at the same time god damn brutal and catching and that makes up for the lacks. Delve into the cave of the ancient and look into the eye of the beast: www.sanctifier.net, www.facebook.com/sanctifier.brazil, www.dyingmusic.com