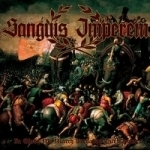 SANGUIS IMPEREM
In Glory We March Towards Our Doom
(Hells Headbangers Records)
37:54min

Californian Death Metal act SANGUIS IMPEREM is a real deal. No bullshit – no gimmicks – no trendy wanna-be Death Metal but only real, all-mangling and totally crushing old school Death Metal in its 100% pure form. "In Glory We March Towards Our Doom" is the band’s first full-length studio outing that came out on Hells Headbangers as CD format last year – and it truly offers a somewhat ultimate joyride for the fans of heavy and dark old school Death Metal in the cryptic realm of SANGUIS IMPEREM. SANGUISM IMPEREM seem to stuck in the early 90s dark and evil sound of Death Metal so deep that it’s no wonder if they are often being compared to bands like INCANTATION, SADISTIC INTENT, BOLT THROWER, NECROS CHRISTOS and early AUTOPSY – especially their "Mental Funeral" era due to some of their doom-laden, all horizon-painting riffs that have so successfully been absorbed into their songs on this release. Also, being a Finn that I am, I can even hear a slight ABHORRENCE influence shining through this record because of having a slice of this eerie, murky and haunting atmosphere beautifully captured into some of their songs in this excellent release. "In Glory We March Towards Our Doom" in my humble opinion is one of those rare examples these days how Death Metal can be done absolutely right. Therefore a legendary phrase ‘only death is real’ applies to this album more than perfectly. More about these fine Cali-Deathsters at: www.myspace.com/sanguisimperem