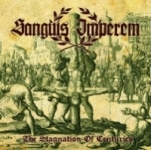 Brutal Death Metal, ordinary brutal Death Metal! That’s what I thought at the first listen of SANGUIS IMPEREM’s MCD "The Stagnation Of Centuries". It’s pretty strange that for some reasons the quality and the detailed songwriting appears not directly at the first time you hear the songs. In the case of this MCD it took me a few runs until I discovered that this recording is one helluva great release. OK, I have to admit that I still think that the opener ‘The Fall Of 66’ is nothing special, a good song, nothing more. But what SANGUIS IMPEREM offers with the next 4 songs is amazingly well performed atmospheric and dark Death Metal with a mood which reminds me a lot to German masters NECROS CHRISTOS. The problem writing a review is always how to describe a band’s recording and the easiest way is always to compare the band to any other especially well-known band. Frankly spoken this is a huge bunch of bullshit in most cases. It would be easy for me to say that several parts remind me to INCANTATION others to SADISTIC INTENT and so on, which might be true though you could easily find many many more other bands which could be figured out here and that’s not meant negative. The only comparison I would like to give is that SANGUIS IMPEREM creates a comparable atmosphere as NECROS CHRISTOS does, though both bands play not really the same brand of Death Metal. All I can say is that SANGUIS IMPEREM impressed me a lot and especially these 4 songs I talked about (‘Humanity’s Dirge’, ‘Led To Disaster’, ‘Intolerance’ and ‘Conflagration’) are examples of how Death Metal should sound in the year 2008: It’s not about blastbeats it’s about creating atmosphere with the songs. A great MCD, in my opinion a must-have for lovers of Death Metal who wants to have their music dark and eerie. Write to blood_command@yahoo.com or have a listen to their songs at www.myspace.com/sanguisimperem if you aren’t convinced yet. The band is already preparing for a full-length release through Invictus Productions from Ireland in mid to late 2009.