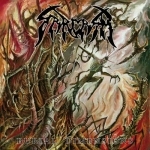 In the middle of 2011 "Never After – The Complete Recordings” was released by To The Death Records where the six demos of this late talented Swedish band were featured. These were "Fleshwaste” (1992), "In Hate…” (1992), "Soul Enchantment” (1992), "Dark” (1993), "Demo 1993” (1993) and "A Touch Of The Burning Red Sunset” (Demo 1994). What made this release even more valuable, was the contribution of the never released and only full-length "Burial Dimensions” which was recorded in 1994. I’m sorry to say, I didn’t know they even recorded this one! Because this compilation was released on vinyl only, you had a run of bad luck when not owning a record player. Well, anyone falling in this category can stop crying because the mighty Dark Descent Records released a close to similar one called "Burial Dimensions”. As far as I know, the only difference part from the listing, is that the 5 rehearsal tracks on "Never After …” are abscent here. If that’s a miss, I didn’t have the chance to hear them. And what you do get is wonderful already. People who don’t know SARCASM, they were a Swedish Death Metal band formed in 1990, that stayed under the radar despite their kick ass music. First acquintance for me was a praising review in MorticiaNumskull Mag # 5 of their demo "A Touch Of The Burning Red Sunset”. Their style was a brutal yet melodic mix and reminded of DISMEMEBER or ENTOMBED only three times faster. Back then, next to similar obscure demos like from DAWN, CENTINEX, BLOODSTONE and INTERNAL DECAY were a very welcome sign of live of this so beloved genre in a time where Black Metal took all attention. The in 1998 released compilation "A Touch Of The Burning Red Sunset” on Breath Of Night Records featured this similar named demo as well as "In Hate…” and "Dark”. One weird detail is that there seems to be something wrong with the tracklisting here. The "Soul Enchantment” demo should be swapped with "In Hate…”, as far as I’m concerned, following my own copy of the "A Touch Of …” CD. The old demos are real gems and everyone in love with good old Death Metal (not particular Swedish) should get this compilation. The album "Burial Dimensions” is a very good album on its own, but I was shocked of some female vocals or keyboard parts that seemed superfluous and were abscent in previous versions. Tracks like ‘A Touch Of The Burning Red Sunset’ and ‘Pile Of Bodies’ were however amazing! The tracks are all re-recorded demo tracks, regarding that the musicianship turned out to be better than ever and together with the atmosphere you’ll get some amazing Death Metal. Listening to this, it’s a shame the band stayed so unknown and underrated and I mourn their existence is no more. Some riffs and solos are simply great. What I always liked is that many melodies create an atmosphere that sometimes leans to Black Metal, but the brutality is always 100 percent Death. Partly by the intense drumming of Oskar Karlsson who also played in DEFLESHED, GATES OF ISHTAR and SCHEITAN. Thanks to To The Death Records and now Dark Descent Records you’ll be able enjoy their impressive discography completely and hopefully this mighty band gets the posthumous respect it deserves. Rest in Peace. More info at: www.facebook.com/pages/sarcasm-sweden/217639118266267, www.darkdescentrecords.com