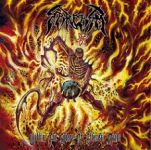 Swedish horde SARCASM had a very twisted history which somehow still continues. They were formed in Uppsala, Sweden back in 1990 and can be considered as a part of the so called Gothenburg style movement, together with bands like EUCHARIST, AT THE GATES and IN FLAMES. They also started with rough Death Metal on their early demos before having a more melodic approach with folkloristic elements later in their history, similar to the aforementioned bands. Their first in 1994 recorded and only finally in 2011 released full-length “Burial Dimensions” was a real little treasure back then and it is a shame that these recordings only saw the light of day officially in 2011 via To The Death Records and 2016 again on CD and vinyl format via Dark Descent Records. After the second re-release and the lasting interest in the band, they guys decided to reform again and started being active and worked on new material. When drummer Oskar Karlsson suddenly passed away, again the circumstances within the band made it difficult to continue. Matte Modin stepped in as drummer but original members Henrik and Fredrik also left. So what can we expect then from their second full-length “Within The Sphere Of Ethereal Minds”? The answer is simple: melodic and aggressive Death Metal at its best. Still their fundament goes back to the mid 90s, when this style and its bands had their creative peak but the album does not sound like a half-hearted try to revive the good old days. Much more the album sounds like a natural development of their old sound with a lot of elements from the earlier days. The band still plays this memorable version of aggressive but melodic Death Metal, with the heavy influences of the NWOBHM, mixed with the Swedish folklore and refined by acoustic guitars. Aggressive screamed vocals, fast and precise drumming with ever-pounding double-bass, melodic twin guitars and technical, complex song structures, similar to what AT THE GATES did on “With Fear I Kiss The Burning Darkness”. What makes this release even more enjoyable is the fact, that they renounce to use any Metalcore elements and keep their sound true but still with a modern painting. Sometimes very old school Death Metal and close to Black Metal, sometimes very melodic like IN FLAMES on “The Jester Race” but never poppy or wimpy. Songs like ‘From The Crimson Fog They Emerged’ or ‘Scars Of A Land Forgotten’ have really the potential to become memorable classics and keep me positive that this genre with new outputs of SARCASM, ABLAZE MY SORROW and THIS ENDING stays alive. I hope the bad circumstances will not stop the band to continue writing and releasing another album in future. More information you will find here: www.facebook.com/sarcasmsweden, www.darkdescentrecords.com