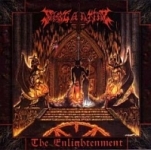 Overlooked by many due to their sparse output, SARGATANAS are among the most elite Death Metal hordes to emerge from the hellish regions of Mexico. Although they began in 1986, SARGATANAS released only a single demo (in 1995) prior to the release of their first full-length, "The Enlightenment". Even though it was recorded in 1996, the album was left unreleased until 1999. The length of time between the recording of this album and its release may also have contributed to its being somewhat overlooked for so long. Upon its release, "The Enlightenment" was easily among the finest Death Metal Mexico had produced. Less technical and melodic than a lot of Mexican Death Metal and completely devoid of the grind influence that tainted much of Mexico’s output, SARGATANAS focus on intense and dark riffs that capture the essence of their nihilistic and Satanic outlook. This philosophical perspective establishes the foundation and purpose of SARGATANAS’ work and permeates every aspect of the sound they achieve on "The Enlightenment". Long before this recent resurgence of occult-centric Death Metal, SARGATANAS delved into the depths of the esoteric and conjured a sound every bit as mysterious and evil as the source of their inspiration. Indeed, this is some of the darkest Death Metal to emerge from the Americas at this time. By 1996 – and even more so by the time of its release three years later – much of the Death Metal emanating from North and South America had lost sight of the brutality and evil that once defined the genre and began to veer heavily toward an over-indulgence in technicality and a focus on more palatable subject matter. SARGATANAS possessed sufficient technical ability to follow that trend, but chose instead to devote themselves to the exploration of the internal darkness of man in a world in which the image of god has been rejected and annihilated. The production on this album is far from polished, yet not lacking in any of the necessary attributes that make for solid Death Metal production. Each of the instruments is audible and none overshadow the rest. The drums are crisp and untreated and the guitars and vocals are unobscured. For anyone who worships dark Death Metal, there is little to complain about on this album. Those who have not been exposed to SARGATANAS should rectify this unfortunate situation immediately by obtaining this CD reissue of their classic debut album. mail@sargatanas.com.mx